Nuestra Señora de la O Parish Church, in Sanlucar de Barrameda, was built around the year 1360. It is one of the most important monuments of Sanlucar.

Nuestra Señora de la O Parish Church, in Sanlúcar de Barrameda (province of Cádiz), is a Mudejar-Gothic temple. It was built around the year 1360.

This project was supported by Isabel de la Cerda and Guzmán, first Countess of Medinaceli and granddaughter of Guzmán el Bueno. One of the towers of the former Alcazar served as a bell tower.

In this Church they emphasised its facade and, in its interior, the magnificent coffered ceiling and images like the Christ of the Vera Cruz stand out.

This is one of the most important monuments of Sanlucar, despite having undergone several remodelling throughout its history. 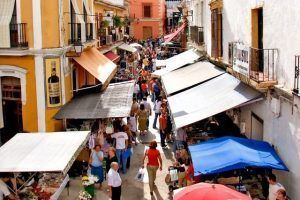 Things to do in Rota
In order to know the creation of the Vía Verde de la Costa Noroeste (“Greenway of the Northwest Coast”),...

Unique Sights and Spots in Rota
Puerta de Rota (Rota Gateway) is known in Sanlúcar de Barrameda as Arquillo. It was part of the old gate of La Fuente,...
Copyright Tudestino S.C. - 2022 Sitemap
Cookies are important to you, they influence your browsing experience. We use analytical, personalization and advertising cookies (our own) to make profiles based on browsing habits and show you personalized content. You can consult our Cookies Policy. By clicking on "Accept all ", you consent to all cookies being saved on your device or you can configure or reject their use by clicking on "Settings ".
Cookies Policy Settings Accept all
Privacy & Cookies Policy